The one where she talks of everything, and nothing at all.

Empty promises to return to the blogging front lines have begun to gather dust.

Have you ever been so far into the middle of the storm that you begin to wonder if you've lost your footing, perhaps stumbled into some alternate reality?

I'm there.  I've been there for a while now.  While the landscape is vaguely familiar, I have yet to acquaint myself with it.  It's populated by the people who have always occupied the cast list in my life; to the positive of that, some have been unwittingly blessed, and saved from being typecast as villains, instead taking on the roles of sound reason and closest to heart.  Of them I which I could talk more, but unfortunately there are plot devices still at large that could easily ruin the ending.

The children.  My beautiful Kinder Major and Bug. Snow white, and her excitement to see me when she comes in the door.  Blueberry Night, a character in a new role, so... lost.  The children are also left to the devices of the writers.  They are the ultimate balm for my troubled heart, but the source of the trouble is the trials they're forced to endure.

I know, I know... you're reading this and thinking "Jesus god, could she lay the rhetoric on any thicker?  Mayhap we could call Tammy Fay on over to give her a few tips on the womanly art of slathering."

I won't lie - I'm feeling a little 'mo.  I can't talk about the most important developments in my life right now, because they're intrinsically linked to the most devastating ones.  While not as "bad" as the hardships that friends and family are enduring, they have a profound effect on four small, beautiful souls.  I'm helpless, and stuck in a stalemate with the universe.  Were I in my ancestral home, you'd find me leaving fry bread and beer at the closest rock cairn.  However, I doubt that the Tuatha De have deigned to follow my family this far and this long.   No, if there is cosmic mischief about, it's coming from far newer tricksters.

There I go again, with the rhetoric.

Tonight, this morning, right this second with my fingers on the keyboard, my stomach is churning, my head is pounding, my teeth are aching, and my eyes are burning.  When I tried to sleep, I found myself doing so in tiny snippets that left me more tired than I was when I started out.

In t-5:00 hours, I take Bug to see the pediatric geneticist.  At 19 months, he is 21 lbs and 29".  It was a fight to get him where he is - olive oil in everything savory, coconut oil in everything sweet.  Balancing out proteins and fats to protect his kidneys and gallbladder.  Strictly monitoring the ingredients of everything that goes into his mouth, cutting out all dairy in any incarnation.  Powdered prescription formula derived from amino acids, re-constituted with vanilla rice milk to mask the taste.

He has only just begun walking in the past two weeks, and his verbal accomplishments are definitely behind the standard milestones.

Frightening possibilities have been thrown down on the table.  Possibilities that, should they become realities, will leave me wondering when I will have to bury my son, or possibly worse, how often I will have to sit with him in hospital as he receives painful treatments to create some semblance of a normal existence.

I sit here, typing this while I watch him sleep in his pack and play, with tears running down my cheeks whenever I think too hard about the implications of the fact that we've made it to this clinic to begin with.

As a woman, not a mother, not a fiance, not a step mother to Blueberry Nights, I've doubted my faith.

When Bug was conceived, I was unsure.  His pregnancy was fraught with difficulties, from a placental abruption in the first trimester he never should have lived through, to his rocky induction at 36w5d.  When his other biological contributor showed his dangerous and sadistic true self, I was angry.  I hated myself and I hated Bug for existing.  I hated him because he was a very prominent reminder of the danger I placed Kinder Major in, of my poor ability to judge one's character.  I hated him, because there I was again - single, alone, with no one that wanted any of us.

It's a hard thing, to go through a pregnancy, an entire pregnancy, with the only touch you receive being your OB exams and the occasional hug from family.  To be isolated, and watch the world and friends and family go by, chattering excitedly about what coloring the baby will favor, mama or papa, to watch partners look at their wives and fall in love all over again.  To know that there is no one who feels that way.

But in the end, I did love him.  I loved him the instant they placed him on my chest, smelling of the intoxicating scent that is new birth.  He looked into my eyes in that moment, as I rubbed him to stimulate him, doing his APGARS in my head and realizing he was failing them miserably.  In that moment, I knew that he was just as stubborn as me, and that I had misjudged him.

So now, here I sit, trembling at the prospect of walking in there alone, without the man who loves us retroactively, who refuses to acknowledge that he is not Bug's daddy.  He is off working for the security of our future.  He loves us.  It's odd to see it typed out that way.  He loves all of us.  Kinder Major, Blueberry Nights, and Bug, as well as me.  We love him back, fiercely, naturally.  Us as a family is remarkably organic in our mismatched minor dysfunction.  He is my best friend and my, dare I be so cliche, soul mate.  It took six years to realize it, but we did, and together as a family it seems like it will all be okay, that we'll make it some way.  The only comfort about him being there and us being here, is that it reinforces our beliefs (and slight trepidation,) that our love as a family is palpable, even 140 miles away.

Can that love make up for those 36 weeks of anger and pain, though?  Or am I to be punished through his punishment?  That, truly, is Hell on Earth.  To watch helplessly as the merry-go-round spins out of control, and traps the littlest feet in the nightmare.  To watch him struggle, to worry and wonder, and in the end be sentenced harshly.

Suddenly, I'm out of things to say.  Time to shower, to put on a pretty face, and my best, most confident foot forward, for all of us need it today. 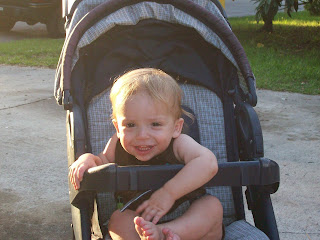 Posted by AccidentallyMommy at 6:48 AM