From total darkness to an incredible lightness of being.

Once upon a time, I existed in a dark, dark room. The windows had been blacked out, and monsters lurked everywhere, not just under the bed. I forgot that feeling was anything more than emotional pain, so I needed to cause myself physical pain, just so I could remember a different sensation.

My left arm. That has been a constant, ugly reminder of that dark room, of those dark times. Those scars stood out, a staunch reminder that once upon a time, I was Not Okay.

I've woken up recently. I realized that I transitioned from that dark room to a room where there was light, but still a film over the windows. I was seeing, but not clearly. When I had that realization, when I let myself feel completely again, I decided never again would I let that film cloud the way. No matter what hurt it brought, it's worth it. And in these few short weeks since that's happened, I've felt more emotions -- good and bad -- than I have in years. It's incredible. I decided a I needed a visual reminder, something that speaks to me, that has always spoken to me, to make me recall how much life sucked before the film was lifted from the glass.

I had started to transform my left arm from a thing of darkness to a thing of light, but it stalled. Just an outline, something that had been done erroneously, something that I was unhappy with. I decided to take charge again, to draw that reminder out and down, and my forearm piece was born.

After that, I took a deep breath, and decided to turn my upper arm into a thing of beauty, even if it wasn't what I originally envisioned. I wanted...no, needed...to own it. I needed to make it something that reflected the incredible lightness that had become being me these days. Behold. The focal point is no longer my scars. It is hours of loving work, sisterly inspiration, backing from friends, and a lot of encouragement from many places. It isn't what I originally wanted, but it IS something I love, and it does reflect the beauty that my life has become. 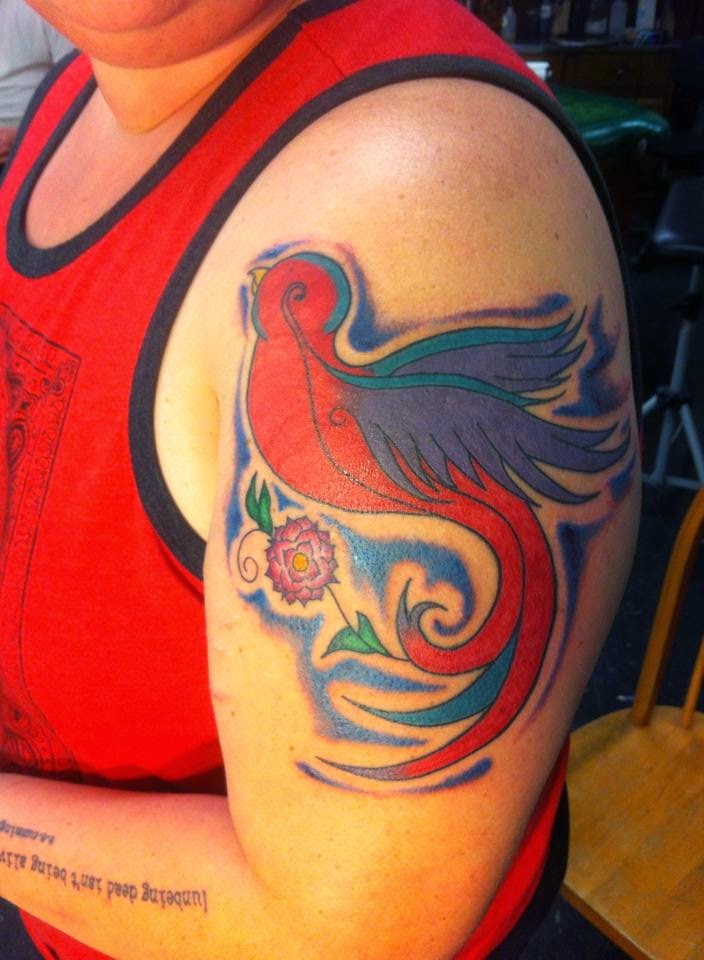 A song bird in flight, and a freshly opened flower for every day. Welcome to my new bright room, y'all.
Posted by AccidentallyMommy at 3:32 PM