It is NO. JOKE. that we here at Accidentally Mommy are big fans of Ninette Swann. Her latest work, however, has obliterated everything else she's written to date. Combining sci-fi with romance is a recipe for awesomeness, in this reviewer's opinion. 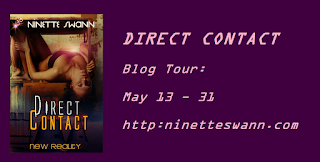 "Julie Gladwell has a secret. Acting as chief attendant for the New Government’s procreation program, she rears girls to carry the emperor’s heir. Only a few are chosen for the program, called “The Special Ones,” and they are given no names, only numbers. They see no one but authorized personnel until their twenty-first birthday. Which is usually when they die. Direct contact is forbidden. As she cares for these girls, no one ever suspects who she actually is.


Scientist Malcolm Odin hated his job and hated himself. Put in charge of the entire human engineering program, the experiments and suffering he witnessed made him sick. Still, it paid the bills and kept him living comfortably in Terrecina. He knew of far too many who’d fallen through the cracks, living on the earth below. The Level People, they were called.


When he confides his unease to Julie, she lets him in on her secret and into her heart. What starts as fancy ends in revolution, but how will they choose between their fellow man and each other?"

Now, Sci-fi is, without a doubt, my cup of tea. Echoing with faint tones of Heinlein mixed with the cult-classic television and movie dramas "Firefly" and Serenity," it blends a desperately dystopian future with the timeless ray of hope -- love.

Characters Malcolm and Julie are well developed, with a depth that none of Swann's characters have seen thus far. The plot is well paced and engaging, and Swann's imagination really took off with the details of this new, bleak society.

Here, read for yourself one of my favorite excerpts:

"We've been ignoring these people for a long time," he said, after they'd passed the remnants of a body on the side of the road.

"Let's hope they're glad to see us, eh?" He laughed, the mirthless sound carrying over the pavement and echoing through the tunnel they'd finally reached.

He was about to utter a few words of warning before they entered the dark confines of the tunnel when a thin but strong arm reached from behind an old highway streetlight pole and wrestled him off the road.

He shouted in surprise, and Julie and Anna ran to his side.

Julie raised her hand to strike the attacker when a woman's voice rang out in an urgent whisper. "Stop!" she said, still holding Malcolm. "I'm here to help you!"

As you can see from the excerpt above, the novel is rich in suspense and surprises. It still manages to find time to be shirt-off steamy, though, so don't despair.

I fully believe that you should pick up this book, even if you're not strictly into romance or sci-fi. It may be the one that changes your sway from one side to the other.


It's up on Amazon: http://www.amazon.com/Direct-Contact-Reality-Series-ebook/dp/B00C2BXXKO


You can find it on Goodreads here: http://www.goodreads.com/book/show/17697673-direct-contact

Want to know a little bit more about the author?

Ninette Swann is a journalist turned novelist who writes her books from sunny Florida in between parenting, freelancing, editing and going to grad school. She writes all genre of romance, including contemporary, thriller, suspense, and dystopian. Her books include Hit and Stay, Body Combat, Finding Home, Just the Messenger and Direct Combat. You can reach her through her pages at: http://ninetteswann.com, http://www.facebook.com/NinetteSwann, and @ninetteswann


a Rafflecopter giveaway
Posted by AccidentallyMommy at 10:57 PM